Ibrahimovic Tired But True to Type

I must admit, Zlatan Ibrahimovic’s confession of being tired of football came as a surprise to me.  There have been times in his short Milan career during which he has looked jaded, but I attributed those to the exhaustion and frustration that a footballer often feels during a game–and, of course, to his generally peevish disposition.  After all, not everyone can wear a broad grin like Cafu or remain unruffled like Paolo Maldini when things don’t go their way.

Ibrahimovic’s candour in admitting his weariness of football is startling, but not completely unprecedented.  Carlos Tevez, currently engulfed by widespread censure for seemingly refusing to come on during Manchester City’s Champions League encounter against Bayern Munich, said something similar in the late fall of 2009, deploring the greed and opportunism in football.  Yet, as far as I can tell, the Argentinian’s Bartleby the Scrivener-style defiance of Roberto Mancini does not seem to be an extension of those musings.

It is easy and common to dismiss footballers as being many things: overpaid, spoilt, thankless, and arrogant (and when Cristiano Ronaldo sneers at the masses by saying he is booed “because he is handsome, rich, and great at football” those dismissals gain prominence).  The reflexive reaction of some to Ibrahimovic’s frank admissions will undoubtedly be of that variety.  However, there is something undeniably refreshing about Ibrahimovic’s cynicism, which complements his conduct and career.

Ibrahimovic has never been the one not to speak his mind.  This is the same player, who at twenty-two tartly announced his arrival at Juventus from Ajax, saying “that he is no one’s sub.”  When he left Inter for Barcelona in 2009, he did not waste any time in criticizing the overtly tactical nature of Italian football, almost seething at how it “ruined” the sport.  No one should expect Ibrahimovic to fawn on his employers, and no one should really expect him to think about anyone other than himself when he talks about his relationship to football.  His is a platitude-free zone, in which he has always been the most important figure.

“I feel that it is not good to stay with one club too long,” Ibrahimovic told La Gazzetta dello Sport earlier this year. “You can get complacent.” 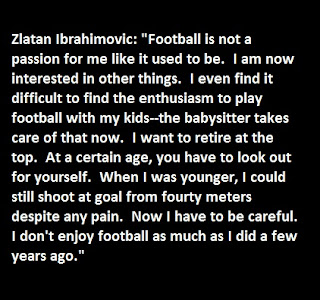 After his latest interview, however, it seems that it is not complacency but the diminishing resilience of his body, the fact that he thinks he is “getting old,” which has prompted Ibrahimovic to speak like an arthritic, leather-skinned veteran nearing fourty.  For Ibrahimovic, who turned thirty just this month, speaking so fatalistically shows a side at odds with the all-action forward who inadvertently drop-kicked Marco Materazzi during the Milan derby just last season (Zinedine Zidane must have chortled).  But behind the admission is also a dependable and typically ugly honesty, upheld unapologetically by self-regard.  Behind it is not just a streamlined 6’4″ frame that is tiring, but also a mental strain that may come at the end of even a successful career like Ibrahimovic’s (even if no European glory, eight domestic titles in a row after all).

Not to anyone’s surprise, footballers have often contemplated retirement or retired prematurely due to physical injuries.  Even at Ibrahomvic’s current club Milan, former great Marco van Basten retired at just twenty-eight in 1995, unable to overcome a persistent ankle problem.  However, it is Ibrahimovic’s emphasis on the mental aspect that is compelling.  He has had injuries in his career, but none the seriousness of Brazil’s Ronaldo or of Alessandro Del Piero, the latter still playing for Juventus at almost thirty-seven.  Many fans and clubs lose patience with footballers over injuries, but Ibrahimovic has shown that players can lose patience with football altogether for personal reasons separate from physical problems.

Former Germany player Sebastian Deisler suffered ruinous ligament injuries, which ultimately curtailed his career at the age of twenty-seven.  However, it was his well-documented depression at Bayern Munich that also contributed to his early retirement.  Judging by the swagger with which Ibrahimovic acquits himself, many may think he does not have the capacity to be melancholic.  However, his interview has shown that despite having riches and a career that has seen him rise from his home-city club of Malmo to Milan, Ibrahimovic, like other footballers, can get tired of even the sport that has afforded him his lifestyle.

Of course, it is Milan who will be now reckoning with Ibrahimovic’s announcement.  Chances are that Ibrahimovic will still continue to be absolutely vital for Milan this season, as he was in the previous.  However, in the event that he is not, you can almost certainly expect people will question his commitment.  Not that Ibrahimovic would care one way or the other.

Calling all Milan fans – You should come and check out the Onebooker betting tips to give yourself a real inside view of what is the best bet you can make, whether it be placing a bet on Milan or any other club. Come to the site today!

Hasan Saiyid blogs at http://www.notevenanoriundo.com. You can also find him on twitter.com/notevenoriundo

Irish fans can bet on football using the best betting offers at Topbettingsites.ie, who only list licensed bookmakers.