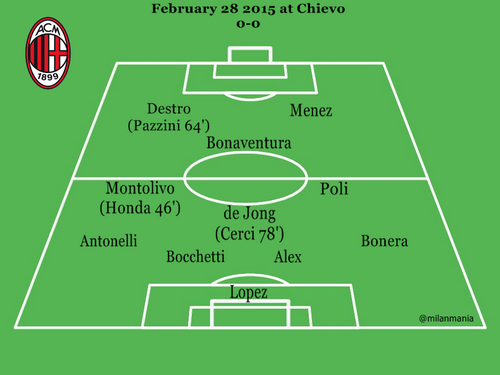 All Serie A games of this 25th match day featured a 15 minute delayed start. The players organized the delay as a form of solidarity with Parma players caught in a chaotic ownership scandal that has been threatening that team’s existence and cancelled Parma’s second game in a row (at Genoa).
Diego Lopez returned to keep the goal, Mexes was back from suspension but (thankfully) only on the bench. Bonaventura had a small knock in the warm up but made the starting lineup. First dangerous chance was created from a Milan freekick in the 16th minute, Albano Bizarri in the Chievo goal stopped the low shot and rebounds. In the 25th minute Sergio Pellissier collected a long ball beat Antonelli and almost beat the on rushing Lopez but the ball was cleared out by Bocchetti. Few half chances were wasted and a wrong offside call against Montolivo disrupted another potential attack but otherwise the first half was rather ordinary except in Milan’s superior possession.
Honda replaced Montolivo for the second, a seemingly positive move. The Japanese moved into a 4-3-3 switch, made a good start and hit the crossbar within two minutes of coming on. Pazzini replaced Destro at almost the three quarter mark. The best chance of the game came right after, good work by Bonavntura cleared Menez on goal, however the Frenchman’s cross was stopped/intercepted well by Federico Mattiello. The final sub was Cerci replacing de Jong. The Dutchman seemed to have a hamstring issue otherwise he was not the intended sub and Cerci wasn’t even sure if he would be coming on for him. Cerci ran well down the right side several times but an actual goal was never really close.
Read more about the game on the forum