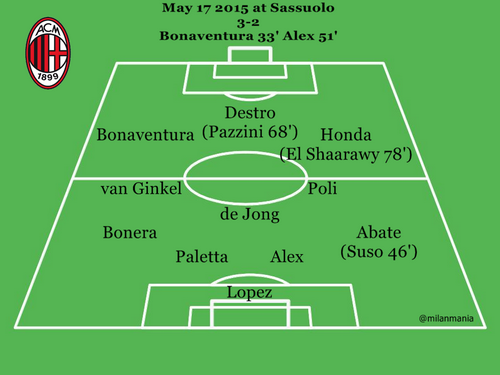 Stephan El Shaarawy made a return to the bench. Bonera started in place of Antonelli. The game proved entertaining if not a happy one for Milan. Juventus owned Domenico Berardi followed up his 4 goal performance against Milan last season by scoring a hattrick in this game. Berardi’s first was a speculative dropping shot which was uncharacteristically dropped by Lopez, the goal was given although it seemed that the ball did not fully cross the line. The goal line referee may have wrong in this case. For the second Berardi may have been just offside when he took on the ball near the half way line and finished a solo effort. The young Italian’s third however was the end result of good passing and movement. Milan’s first was scored after good individual work by Bonaventura who then finished into the far corner. Alex headed in Milan’s second after a corner and cross. The Sassuolo players were unhappy and claimed that the Brazilian had bumped into Andrea Consigli in the Sassuolo goal. Milan finished the game with 9 men after Bonaventura received two yellows and Suso – on for Abate at half time – a red late. Pippo Inzaghi will have selection problems for the game vs Torino on the 37th matchday.
For more about the game as it happened click here.