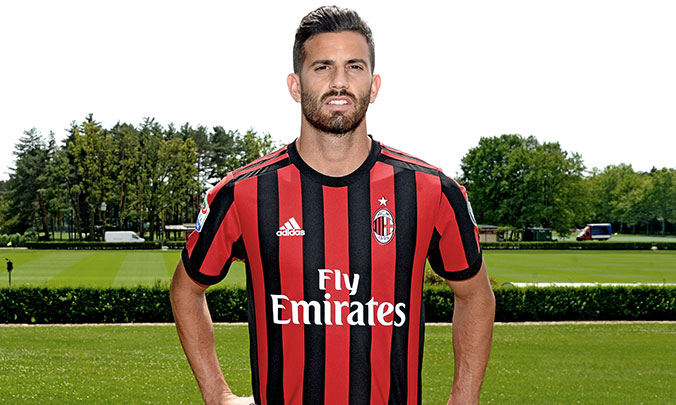 The new era with the new Chinese owners got to work right after the last game of the season and the long rumoured and awaited Mateo Musacchio signing is now official. The 26 year old Rosario, Argentina born central defender signs after 7 years at Villareal. The transfer fee looks to have been around €18 million.
On the same day Montella’s contract was renewed till 2019. As expected the coach will continue to be part of the new rebuild with more signings to come.

After seemingly weeks of every team trying to avoid the prize Milan captured the final Europa League qualifying spot. A somewhat convincing 3-0 vs Bologna means sixth place in Serie A and thanks to the involvement of Lazio in the Coppa Italia Final (vs Juventus) Italy gets this additional ticket.

The 3-0 win once again featured a different looking line up. Bacca and Lapadula started up front together and the midfield had Deulofeu playing as a kind of right midfielder along side Bertolacci, Montolivo, Pasalic and Vangioni. The trio at the back consisted of Romagnoli, Gomez and Paletta. In any event this was sufficient and the win an important step for the future of the team.

The final game of the season will force another change in the line up as more players are absent. Romagnoli and Deulofeu are both unavailable after the Bologna match and that almost certainly means Deulofeu has already played his last Milan game and will return to Everton or parent club Barcelona in June. Montella may therefore return to the oft used 4-3-3 and give Honda a start with Bacca and Suso. The Japanese came on for Bacca vs Bologna and scored from a beautiful free kick. On the plus side Bonaventura is back in the squad but will stay on the bench having just returned from a long absence

The rumour mill has suggested many changes to come and perhaps just as importantly the Donnarumma renewal is still not close to being settled with suggestions of hard lines by both sides. Follow that story and the summer transfer market on the forum. In the meanwhile this game will be a relatively relaxed one before a very important and possibly very exciting summer. 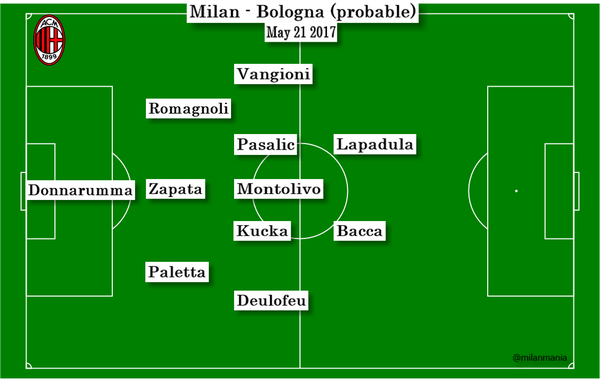 The week 36 1-1 tie versus Atalanta condemned the team into possible July fixtures to qualify for the Europa League proper. While European football is in Milan’s DNA and the Europa League provides exposure and limited riches playing qualifying games in July will hurt the team in another way as they limit the long planned July friendlies in China. Fiorentina lost to Napoli in those teams’ week 37 encounter so a win versus Bologna fulfils wishes of European participation, repeatedly expressed by Marco Fassone and others in charge of Milan.

Milan’s recent form has been anything but impressive and Montella took advantage of both absentees and returnees to give Montolivo a first start in a long time. The new and nominal 3-5-2 used versus Atalanta this late in the season added question marks for the coach but with one win in the previous six he was perhaps entitled to change the make up of the team. In the end the point meant little and a Suso yellow has ruled him out of this fixture vs Bologna at the San Siro.

Bologna have been scoring and conceding many goals in recent weeks and in their last four games – where they have a record of two wins and two losses – they have scored ten and allowed seven. Milan’s suspect three man defense will need to have a mistake free game and secure European football with three points. No excuses even though Bologna have shown they can score in bunches. The aforementioned 3-5-2 is set to include both Lapadula and Bacca starting together with Deulofeu possibly forming a trio to make it look more like a 3-4-3. Paletta might get a start instead of Gomez along side Zapata and Romagnoli. Vangioni will start in De Sciglio’s spot because the latter suffered a hamstring injury late in the Atalanta match and will miss the final to matches of the season, and if transfer talk is anything to go by he might have played his last Milan match altogether.

Any lingering doubts that the current Milan squad is not up to par with the top – and bottom, based on recent results! – Serie A teams were erased by the humiliating and embarrassing 1-4 home loss to Roma. Even after the last dismal decade the week 35 loss was hard to take. The loss also came at a time when Montella’s job, if not under threat, was subject to queries. Those questions have now grown louder. Whether the old ‘he doesn’t have the players to win’ argument really applies now or not is perhaps barely and slightly debatable but the exile of Locatelli and somewhat questionable substitutions – various ones involving Ocampos and Vangioni for example –  do not help. It may even be time to wonder if Bacca should be given more minutes to at least perhaps and may be poke in a goal or two. Lapadula has not offered a better glimpse of goal when played in the Colombian’s place.

The predicted line up for the Atalanta match is an eye opener. Several sources claim Milan may switch to a 3-5-2 for this match, with a slight chance of playing without a center forward! It seems that Montella will load the middle of the park and leave two of Suso, Deulofeu, Lapadula and Bacca  as forwards. The latter two starting up front is of course normal and there is nothing new with forward-less line ups either but a major change this late in the season may simply not make a difference.

Romagnoli is healthy and back in the squad, he may start in a back three with Zapata and Gomez and the aforementioned packed midfield will likely feature any five of De Sciglio, Pasalic, Kucka, Sosa, Vangioni, Suso and the returning Montolivo.

Atalanta are six points ahead of Milan and feature two familiar names in Bryan Cristante and Andrea Petagna. The closest rivals have also dropped points with Inter notably firing Stefano Pioli this week. The form of other teams has allowed Milan to remain within touching distance of fifth spot but anything less than three points this week and it is over. Perhaps thankfully for Milan and its fans the Coppa Italia finals features Juventus and Lazio. This means the sixth place does qualify for the Europa League, but with games starting in late July! 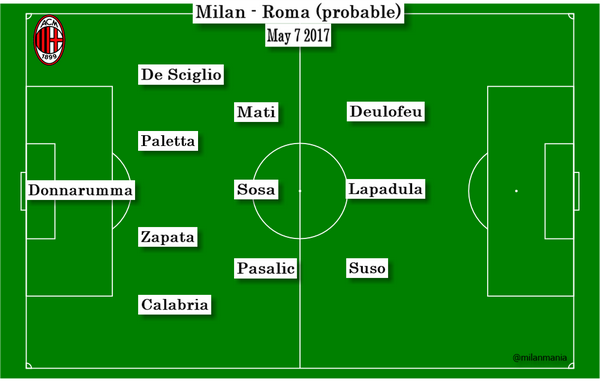 Dropping points versus lowly teams has become a major issue for Milan. The 1-1 tie vs Crotone reduces the chances of making it to the Europa League next season, a target that new CEO Marco Fassone has repeatedly stressed is very important. As is it is already unlikely that the fifth placed team, Atalanta five points ahead of Milan, can be caught with so few games left. Milan’s only route to European football next season may be via an extra spot due to both Juventus and Lazio contesting the Coppa Italia final being ahead of Milan and top five in Serie A.

Romagnoli will miss another game and the poor and mistake prone duo of Paletta and Zapata will face a much stronger team in Roma. In midfield Kucka is suspended as a result of his two yellows against Crotone. Sosa however is back from suspension – as is De Sciglio – and is likely to start at the expense of Locatelli. The continual light use of Locatelli is something that adds a few questions for Montella to answer. Up front Bacca continues to add very little and Lapadula may start again. Roma are coming off a 1-3 home loss to Lazio and have Antonio Rudiger and Kevin Strootman serving suspensions.

Having said all that, the summer transfer activity is capturing a lot of fans’ attention. Whether the promised millions, as high as €150 million according to many rumours, will really materialize is up to question, as is the ability of Milan to attract top players. For now players like Franck Kessie and Lorenzo Pellegrini are the subject of most rumours. Fassone has also said that the aim is to build a strong Milan ready for the Champions League. It remains to be seen how easily that can happen with players like the two aforementioned midfielders. Mateo Kovacic may be difficult to pry away from Real Madrid but is a better option. Up front a top class replacement for Bacca will be needed but whether one can be found is difficult to tell, many fans hope of the likes of Pierre-Emerick Aubameyang but that is not very realistic. At the back a partner for Romagnoli is near the top of team need and Mateo Musacchio continues to be linked. Lots to be done to take Milan back into Europe.