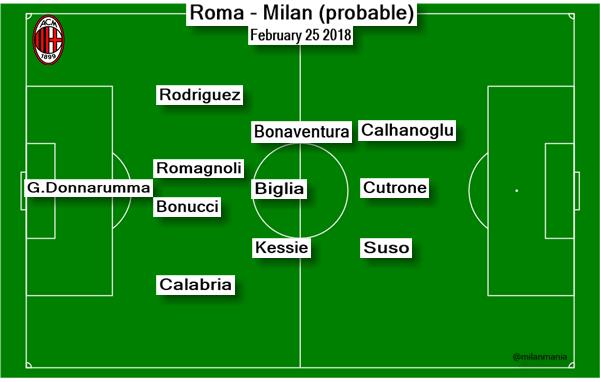 Important but not spectacular 1-0 wins vs Sampdoria and Ludogorets have added to the momentum of Gattuso’s Milan. The talk of him remaining beyond the summer has become louder and will become even more so if Milan continue to do well in upcoming matches vs Roma, Inter and the next opponents in the Europa League (Arsenal). A very sound first half vs Sampdoria produced a tame penalty miss by Rodriguez and a goal by Bonaventura. In Kalinic’s absence Cutrone started and Silva came on a sub, Cutrone did well and Silva too. In midweek, with Kalinic on the bench, all three of Silva, Cutrone and Borini started up front. The latter scored the goal from a good Cutrone cross to take Milan to the next stage with a 4-0 aggregate score. The opportunity was taken to rest all of Suso, Calhanoglu, Bonucci and Biglia.

Roma provide a big test and coming before the continuing heavy schedule the pressure and fatigue is sure to be ever present. After Roma there is the second leg of the Coppa Italia semis at Lazio (0-0 first leg), Inter and with no respite the last 16 of the Europa League.

Roma lost in the Champions League midweek (2-1 at ) but Dzeko, Under, El Shaarawy up front and Alisson in goal will test and resist Gattuso and Milan.

Milan will likely revert to the more settled lineup that features Calhanoglu, Cutrone and Suso up front. Biglia, Bonaventura and Kessie in the middle and Rodriguez, Romagnoli, Bonucci and one of Abate or Calabria at the back. Gigio will return to his spot after also having a match off vs Ludogorets. The settled line up and uptick in fortunes on the pitch are in contrast to more troubling reports that owner Yonghong Li is bankrupt and in trouble at home in China. This was denied via a video message by the man himself but the saga is nowhere near cleared up.