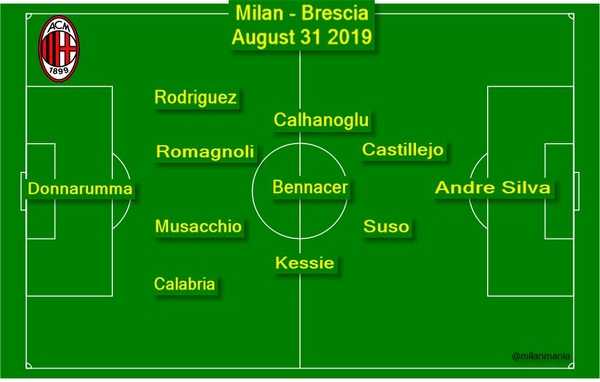 Week 1 was a very poor start to the season. Losing 1-0 to Udinese away is always a bad start to a season but the manner of the loss and the tactics and player choices were disappointing at the very least. The team was unable to apply any sustained pressure on the hosts and the movement and cohesion was missing. This was perhaps not very surprising because the entire starting 11 was composed of last year’s players. No starting places for Bennacer, Duarte, Krunic and Leao.

As bad as the match and result were Giampoalo’s post match interviews were worse. The coach seemed to admit defeat and show willingness to abandon his famous 4-3-1-2. It is true that the team has not managed to acquire a real number 10 to play behind the strikers. Suso in that spot was unlikely to be a good long term fit and it showed but maybe Paqueta or Bonaveuntra could do well there. Not to mention a a new player may arrive, even someone as highly touted as James Rodriguez from Real Madrid (on loan). Nevertheless the coach seemed willing to revert to the failed 4-3-3 after only one week of action. All this, implicitly if not explicitly, to accommodate Suso.

In the end 2019-2020 started as bad as any and confusion has reigned since. Will the coach really do a 4-3-3 versus week 2 opponents Brescia or will he try a 4-3-2-1 Christmas tree. Football betting sites, journalists and fans have had a hard time figuring what could happen for the home opener. Most are in agreement that Bennacer will anchor the midfield as Biglia is carrying a small injury. The defence looks to stay the same and feature Calabria, Musacchio, Romagnoli and Rodriguez in front of Donnarumma. Kessie and Calhanoglu may start behind Suso, Castillejo and in a late surprise Andre Silva. That looks like a defacto front 3 but could be a 2 behind Piatek. Since the start of preseason Castillejo has been indifferent and poor, so has Piatek and this lineup does not look promising. A poor result against a newly promoted team would confirm a disastrous start to the new season. After the match there will be only 48 hours left in the transfer window. Eyes will be on that too.

Mario Balotelli signed for his home town team of Brescia in the summer but is carrying a four game suspension from last season and won’t play versus Milan. Brescia won their season opener 1-0 versus Cagliari, without Balotelli of course.