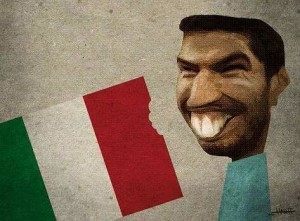 Colombia already qualified and unlikely to finish anything but first in this group started a much changed side with all of Mario Yepes, Cristian Zapata, James Rodriguez and Teofilo Gutierrez rested. Early Colombian balls soon changed and the game turned into more Japanese control. Keisuke Honda wasted or missed several set pieces. It was Colombia who scored first, however. Yasuyuki Konno appeared to bring down Adrian Ramos and Colombia were awarded a penalty which was converted centrally. Japan finally made their possession count and equalized right at half time. James Rodriguez came on at half time and provided the pass for Colombia’s second. As Japan went forward in search of a needed goal Rodriguez provided the assist for Colombia’s third. Later goalkeeper Faryd Mondragon came on for David Ospina to break the record for the oldest player ever – 43 – at the World Cup. He beat Roger Milla’s record. Rodriguez finished a beautiful pass just before the 90 minute mark.

In the other game Ivory Coast disappointed in the first half and went behind. There was more urgency in the second half and the equalizer came. It was all not to be as a dubious penalty was awarded to Georgios Samaras and he scored it himself to send Greece through.

A draw would be enough for Italy. Cesare Prandelli still undecided about his best line up started Ciro Immobile and for a second time Marco Verratti. Italy had the better control of the ball but most of the final ball or two were poor. Both teams had their share of fouls and somewhat rough play. Mario Balotelli was given a yellow and would miss any round of 16 match. To some surprise Balotelli was taken out at half time in favour of Marco Parolo. The second half contained more whistles and complaints by both sides. The first controversial moment of the game arrived when Claudio Marchisio was red carded for a high boot that some thought might only deserve a yellow. For a while it did seem that Italy could actually escape with a poor 0-0 but Diego Godin jumped and headed into the right side. The second and bigger controversy came when Luis Suarez appeared to bite Giorgio Chiellini’s shoulder. Mexican referee Marco Rodriguez didn’t take any action. After the final whistle Suarez received some condemnation for a repeat – third – biting act. Coach Cesare Prandelli and federation president Giancarlo Abete resigned upon Italy’s early exit.

Brazil achieved what was expected with a bit more style than their first two games. An already eliminated Cameroon withstood the few opening minutes which had Neymar close on two occasion. Neymar finally did score but it was Cameroon who seemed to settle into the game. The reply came when Alves was unable to handle the Cameroon winger and his cross found Matip who tapped the ball in. David Luiz’s nonchalant reaction to the ball passing in front of him – with him facing his goal – highlighted Brazil’s defensive vulnerability. But before long Neymar got the lead back with a somewhat weak shot. The second half settled the match with Fred collecting the cross and shooting into a corner and substitute Fernandinho finishing late.
In the other game Mexico knocked out Croatia with a three goal in 10 minutes span. The Europeans hadn’t done enough and when they did Ochoa was good enough. Ante Rebic got himself sent off late not long after Ivan Perisic had scored a consolation. Mexico coach Miguel Herrera added his name to World Cup folklore with his wild celebrations.

A Holland win or tie would have them finish first in group B, a win would be required for Chile. Robin van Persie served his one game suspension for two yellows in the opening matches and Arturo Vidal was on the bench for the Chileans. The start had lots of whistles and a wrong offside call against Chile in the 15th minute. Chile had the better of the ball and a couple of penalty shouts as well. However, neither team really took control of the first half. The deadlock was broken when a cross from a corner was headed in by Leroy Fer. Fer had only come on less than two minutes earlier. Memphis Depay assisted by Robben finished off the game via a counterattack. Chile had several other complaints for fouls and corners and continued to enjoy more of the possession until the end.
In the other match Spain dominated Australia and David Villa, one of many of a changed squad, opened the scoring with a nicely placed goal. Fernando Torres and Juan Mata scored the other two. Spain insisted that no wholesale change is needed and declared themselves set for 2016 and 2018.