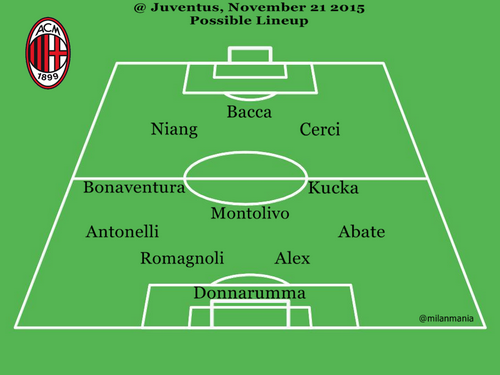 After the international break a big match awaits. Somewhat surprisingly Juve are below Milan in the standings of course and it happens that only two points separate the teams, fighting to get into Europa League spots.

For a few days it seemed that Buffon might not make it and remain absent but he has recovered and should start against Milan near the 20 year anniversary of his debut against Milan. His opposite number in the Milan goal will be a very fresh face and Donnarumma hopes to follow in the veteran’s footsteps with a long successful career.

On the injury front Balotelli’s saga may have been resolved, he had hip flexor surgery and will be out a minimum of four weeks. Bertolacci has not recovered yet and de Jong is out as well. Juventus have a few players missing too as Khedira, Caceres, Pereyra and Asamoah are sidelined.

The 4-3-3 is likely to remain the choice for the time being with Bonaventura, Montolivo and Kucka in the middle of the pitch joined by Niang, Bacca and Cerci up front. Alex has recovered from his head knock and should partner Romagnoli  in the center of the defense. Abate and Antonelli will get the call at fullback.