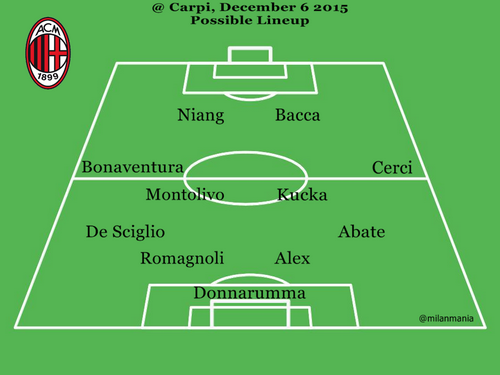 With the biggest win of the season behind the team it is time to meet Cristian Zaccardo and Carpi. The 4-1 win against Sampdoria was as much convincing as was Sampdoria’s poor performance was surprising. Niang and Bonaventura’s form and goals created good attacking potential but there are slight concerns with Bacca’s recent (lack of) contribution.

The so called 4-4-2 is likely to remain the same against Carpi as Bertolacci is still not available. Another player was added to the injury list with Antonelli picking up a left thigh injury in training. His absence is hoped to be short term. De Sciglio is expected to get the start at left back instead. The rest of the team is settled for now. Alex, Romagnoli and Abate complete the defense as the best available with Bonaventura, Montolivo, Kucka and Cerci in the middle. Bacca’s aforementioned loss of form may provide a start for Adriano but the likelihood remains that Mihajlovic will stick with the Colombian.

Carpi sit in the relegation zone but are coming off a win at Genoa. With other week 15 results including Napoli’s loss to Bologna three points gets Milan a bit closer to the top.