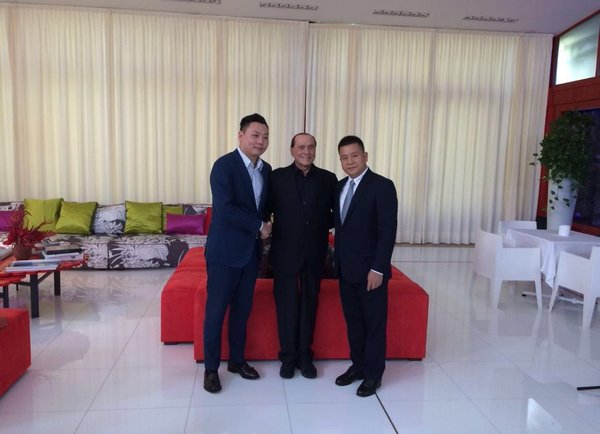 Berlusconi with the representatives of the Chinese group

The sale has become official. the day finally arrived.

Fininvest have released a statement confirming that preliminary sale to a Chinese group composed somewhat differently from the much talked about group.

The binding deal is valued at €740m, is led by Sino-Europe Changxing Sports Investment Management Co.Ltd which includes China’s State Fund for Development and Investment, Haixia Capital and Li Yonghong, the amount includes cleared debts of around €220m. There are plans to invest €350m over three years. Up to €100 million will be available between now and the deal’s closing, due before the end of 2016. The amount available for this transfer window, which closes on August 31st, may only be €15 million.

The management structure is not clear yet as it seems part of the delay was due to disagreements and the group that finally secured the deal does not include Nicholas Gancikoff, the touted future Milan CEO.

Lots more to follow, here and on the forum.

The rest of the article as it appeared before August 5th is below:

Today Berlusconi was released from hospital and said that he has sold Milan. He has demanded that the Chinese invest €400 million over two years to bring Milan back to the top. More details and preliminary agreement signing should be next week.

According to sources, Robin Li, of search engine Baidu, the sometimes rumoured leader the Chinese group is indeed the main person behind the bid.

Galliani may leave his CEO post as soon as September but will leave as a vice president or in some sort of similar capacity, as will Barbara Berlusconi. Nicholas Gancikoff will then become Milan’s CEO. There is no clear or official indication on what will happen after this summer. Many hope to have a clearer picture next week, July 12th or 13th, when and if the preliminary is signed.

In the meanwhile Galliani is looking to make rapid recruitments and names like Marko Pjaca, Mateo Musacchio, Shkodran Mustafi are most mentioned.

Despite the new transfer budget Carlos Bacca is likely to leave as Montella is given more freedom to shape his squad.

More than two weeks have passed since the initial Berlusconi statement upon his release from hospital. The market has since been ‘blocked’ awaiting the take over. The bigger names like Baidu’s Robin Li have been replaced by lesser names like Sonny Wu and venture capitals instead of personal or corporate wealth. There is little known about how the take over will really be, there have been too many reports and contradictory statements from supposed insiders. At this point there is even a possibility of a 100% take over (instead of 70~80%) and there is an outside chance that nothing will happen. In the meanwhile the team is flying to the US for the International Champions Cup and Montella is taking with him an uncertainty as to who he will have at his disposal when the season starts the weekend of August 21st.

With no end in sight and repeated delays just to produce a preliminary agreement Milan, and not a final closing one, Milan moves further in to the abyss. The chances of a preliminary agreement before the end of the transfer window get dimmer every day and a final agreement is not even something to speculate about. The only way to buy a player and strengthen the team this August is via selling first because no one including Fininvest is willing to spend ‘out of pocket’. Therefore De Sciglio’s – after Bacca’s failure to reach an agreement with West Ham, PSG, etc – name has popped up to raise some money. It is just a rumour but sacrificing the supposed ‘unsellable’ player would be another episode in the poor management saga that is Berlusconi and Galliani.