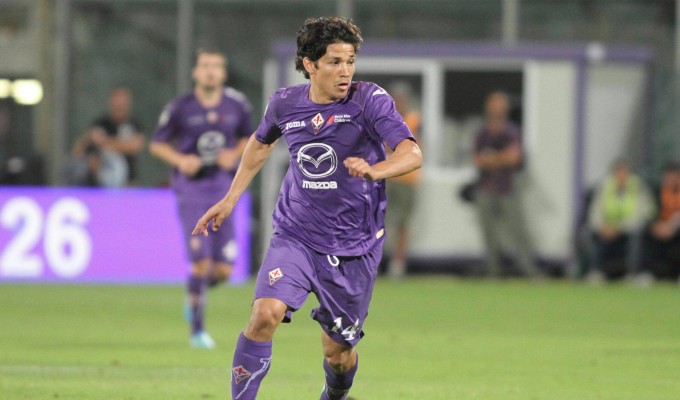 A transfer deadline day that featured many rumours as usual but many unlikely and outlandish ones like Cesc Fabregas, Aaron Ramsey and Jack Wilshere ended with a player long requested by Montella.

Mati Fernandez, the 30 years old Argentina born Chilean attacking midfielder, snubbed Cagliari and accepted a move to Milan. He join on initial loan with an option to buy. The option is said to be a low fee. Montella was the player’s coach while at Fiorentina.

He joins a Milan midfield in desperate need of creativity and skill, however the same midfield is now crowded with Montolivo, Kucka, Bertolacci, Sosa, Poli, Honda, Bonaventura, Pasalic and Locatelli vying for playing time. 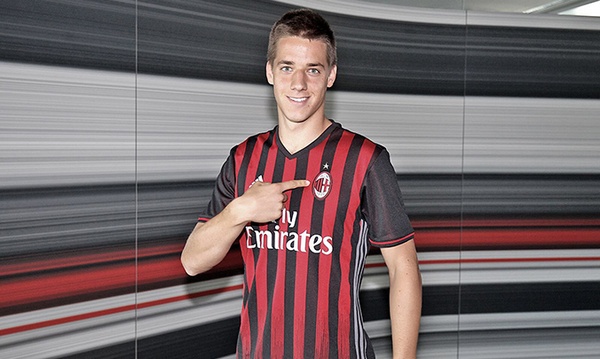 Chelsea have had a policy of loaning out youngsters across Europe and one of those is Croatian Mario Pasalic. Today he signs with Milan for a one year loan, apparently there is no option to but a right of first refusal next summer.

The German born ex-Hajduk Split midfielder spent the last two seasons on loan at Monaco and Elche but has been hampered by a back problem for most of this calendar year. An ‘in-depth’ medical has cleared the way for him to sign with Milan. 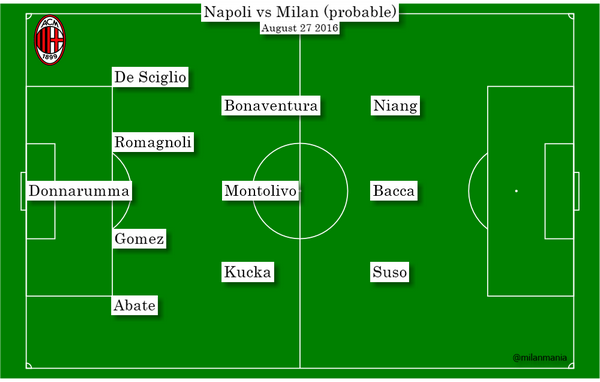 The opening week resulted a 3-2 win vs Tornio. The first half gave hope for a functioning team taking new ideas from new coach Montella. The team trailed off in the second half however and showed lack of fitness. The defending didn’t exactly distinguish itself with Antonelli and to lesser extent Romagnoli disappointing. The latter could have done better in preventing Cristian Molinaro’s cross being easily headed in by Andrea Belotti. In the end Bacca had a welcome hattrick and Donnarumma saved a last second penalty to preserve the three points. In the midst of it all Paletta collected two yellows to miss this week 2 game.

The now Higuain-less Napoli struggled in week one too. The team fell 2-0 behind to newly promoted and Massimo Oddo coached Pescara before recovering and salvaging a tie following a Dries Mertens brace.

Paletta’s enforced absence and the injury to Zapata mean that Gomez is almost certain to get his Milan debut. It should be hoped that he can provide a solid performance, not only in this game, but moving forward as well as the current summer transfer window is not likely to add any further defenders. Gomez will partner Romagnoli and is likely to be joined by De Sciglio and Abate at the back.

Bertolacci’s injury rules him out of this match too and therefore the midfield will remain the same trio as the Torino match meaning Kucka, Montolivo and Bonaventura start. Newcomer Jose Sosa might make the bench. The forward trio should remain unchanged as well with Niang, Bacca and Suso working within the new fast paced system showcased in the first half vs Torino. 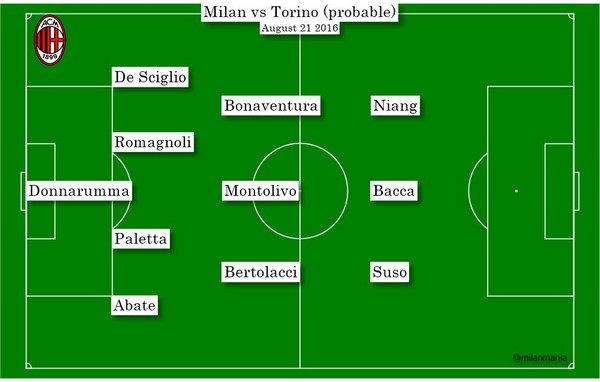 A historic summer is coming to an end for Milan, one that provided much uncertainty and still has not taken form.

The much talked about and seemingly sure thing sale of Milan dragged on and on and only reached the preliminary agreement stage in August. The months preceding the agreement gave fans and all observers much to doubt but the aftermath of the agreement has disappointed too.

Those same months brought transfers that didn’t seem to fill any need. Leonel Vangioni’s arrival from River Plate, finalized early in year, was and is rightly questioned. A full back not being the most urgent team need. Early in the summer Gianluca Lapadula arrived from Pescara and again a forward not the team’s most urgent need. Perhaps these transfers can be defended on assumptions that De Sciglio and Bacca were to depart but neither has left yet and may never leave.

The agreement with the Chinese brought increased hope for a much needed rebuild, the hope that Adriano Galliani is replaced and a new management team plans and spends wisely but massively. Marco Fassone, veteran of other Serie A teams like Inter, is said to replace Galliani soon and he may have funds to spend. The aforementioned funds have not materialized for the summer 2016 transfer window however as the agreement is not final and neither party are willing to spend without a final signature.

Many names have featured in incoming rumours and as is often the case have many have been just rumours or have been lost to other teams. Names like Marko Pjaca and Piotr Zielinski made it to other Serie A teams while Milan without funds and without leadership have unearthed lesser known and lesser rated players like Gustavo Gomez and Jose Sosa. The remaining days of the transfer window look to disappoint as well since the only possible way to capture players is in way of loans with obligations to pay next year. It remains to be seen if any player of the caliber of Mateo Kovacic can be had this way.

So the new season starts with Montella at the helm and a promise of investment in January and summer 2017. The coach has settled on a 4-3-3 formation and early on seemed open to losing Bacca and using Lapadula or Niang as a lone center forward. In the meanwhile he has to deal with an ineffective midfield and a questionable defense. Montolivo has to put a 2015-2016 poor season behind him as does Bertolacci. The indications are that both will be starters. Bonaventura will need to replicate his previous season’s form and also further prove that his exclusion from Italy’s Euro 2016 squad was a mistake. Further up front Suso has been in good form since his loan spell at Genoa and has shown promise in the preseason, Niang has shown growth as well and Bacca will likely start as long as he is still a Milan player. At the back the choices are sparse, Paletta returns from a loan and needs to be really good as does new arrival Gomez because other than Romagnoli the choices are not inspiring to say the least. Vergara, Ely and the injured Zapata do not fill any person with confidence. De Sciglio looks likely to edge out Antonelli for now and Abate will retain his spot. In goal Donnarumma will be given the chance to continue to show that he is the big prospect that he promised to be in 2015-2016. On the subject of goalkeeping it is a surprise that Lopez is still a Milan player, at one point he was close to moving to Chelsea, to serve as Thibaut Courtois’ back up, but the transfer fell through. Donnarumma is backed up by the returning (from loan) Gabriel and perhaps someone other than Lopez, the window is still open! 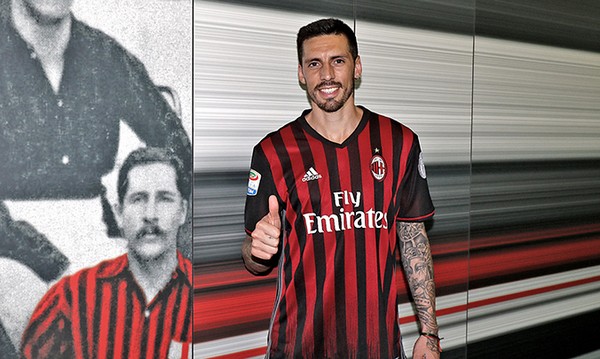 After much talk about finding possible midfield reinforcements within the supposed €15 million summer budget, and a search that spanned continents Jose Sosa signs from Besiktas for a reported €7.5 million.

Last week Boca’s Uruguayan Rodrigo Bentancur seemed close to Milan but since Juventus have an option on him, as part of their Carlos Tevez deal, it has been difficult to get the 19 year old to Milan. One ‘alternative’, if one could call it that, had been Sosa and the 31 year old and comes to Milan after shining in Turkey but flopping at Bayern, Napoli and elsewhere before it. 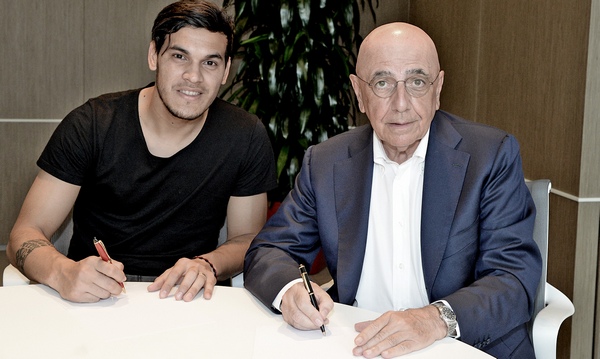 In a deal that was out of the blue and concluded quickly by most football standards Gustavo Gomez signs a five year contract with Milan.

In the last few days when the Chinese deal seemed to be collapsing and the transfer market blocked the name of Gustavo Gomez popped up and surprised many. Most Milan fans knew little to nothing about the Lanus central defender. To some at least he seemed like a cheaper alternative to the likes of Mateo Musacchio and Shkodran Mustafi and a sign that Milan were trying to find a lower cost defender to fill the spot left open by the departures of Mexes and Alex after last season.

The 23 year old Paraguayan has signed for an apparent €7 million fee.