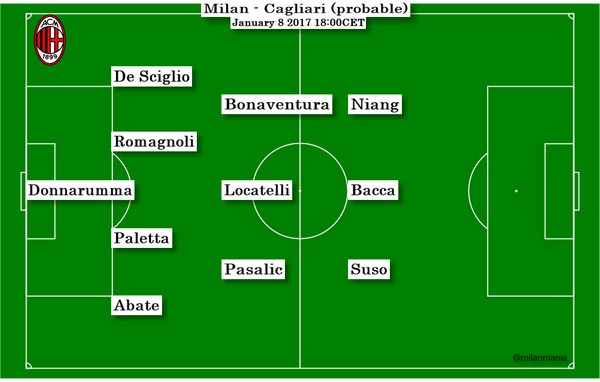 Follow the game as it happens, on the forum.

The shootout Supercoppa win versus Juventus at the end of 2016 added an element of optimism to the season and a renewed hope for the youth set up that has of course yielded stars and stars in the making like Donnarumma and Locatelli. The on going Chinese take over saga may come to a positive conclusion (early) in 2017 and any doubts erased soon after but as of January 2017 and its transfer window it is still all speculation and dreams of big spending remain only hopes.

Cagliari featuring Marco Borriello present the first 2017 challenge. Beside Montolivo, the long term absentee, the team is relatively healthy and Mati Fernandez is the only other player missing as Calabria, is back in the squad but unlikely to feature in this game. However, late in the week Kucka suffered a knock and joined the injured list.

Early in the week the thought was that Locatelli might be rested or saved because he is one yellow card away from suspension but news is that he will indeed start and Bertolacci remain on the bench. Locatelli will be joined in midfield by Bonaventura and Pasalic. The front three will be the familiar Niang, Bacca and Suso trio. The defense will also be very familiar and the usual quartet of De Sciglio, Romagnoli, Paletta and Abate are likely starters in front of Donnarumma.

Transfer activity will likely remain underwhelming if not non existent this January but hope springs eternal for the summer with names like Keita Balde, Domenico Berardi and Federico Bernardeschi mentioned. In the meanwhile the target is to qualify for Europe and gain valuable experience on the way.