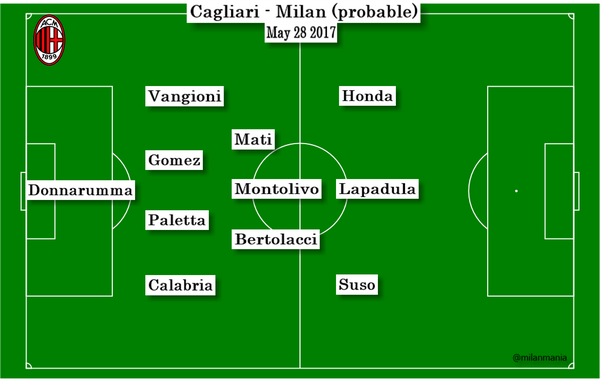 After seemingly weeks of every team trying to avoid the prize Milan captured the final Europa League qualifying spot. A somewhat convincing 3-0 vs Bologna means sixth place in Serie A and thanks to the involvement of Lazio in the Coppa Italia Final (vs Juventus) Italy gets this additional ticket.

The 3-0 win once again featured a different looking line up. Bacca and Lapadula started up front together and the midfield had Deulofeu playing as a kind of right midfielder along side Bertolacci, Montolivo, Pasalic and Vangioni. The trio at the back consisted of Romagnoli, Gomez and Paletta. In any event this was sufficient and the win an important step for the future of the team.

The final game of the season will force another change in the line up as more players are absent. Romagnoli and Deulofeu are both unavailable after the Bologna match and that almost certainly means Deulofeu has already played his last Milan game and will return to Everton or parent club Barcelona in June. Montella may therefore return to the oft used 4-3-3 and give Honda a start with Bacca and Suso. The Japanese came on for Bacca vs Bologna and scored from a beautiful free kick. On the plus side Bonaventura is back in the squad but will stay on the bench having just returned from a long absence

The rumour mill has suggested many changes to come and perhaps just as importantly the Donnarumma renewal is still not close to being settled with suggestions of hard lines by both sides. Follow that story and the summer transfer market on the forum. In the meanwhile this game will be a relatively relaxed one before a very important and possibly very exciting summer.