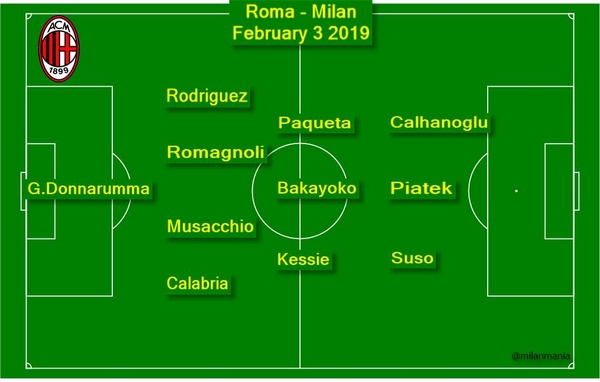 The January transfer window ended with money spent bringing in Piatek from Genoa. The Polish striker was to replace Higuian. Of course Paqueta had arrived much earlier. However the search for other positions – in particular a natural left winger – failed. The team is handcuffed by UEFA’s financial fair play and this made players like Yannick Carrasco out of reach. Minus Higuain’s departure to Chelsea – his loan from Juve was dissolved and he was loaned to Chelsea – there was only one outgoing transfer when Halilovic left on an 18 month loan to Standard Liege. More departures were rumoured but the likes of Borini, Calhanoglu, Montolivo and Bertolacci will remain, at least until the summer.

It is of course up to the existing and two new comers to make the push for fourth spot and Champions League football. Piatek did his part in great style by scoring two Coppa goals versus Napoli on his starting debut. Days after tying Napoli 0-0 in the league the team moved on to the Coppa Italia semi finals and a meeting with Lazio. The Coppa win came after recovering some league form in beating Genoa 2-0 but losing to Juventus in the Supercoppa. In part due to others’ poor form Milan still sits in 4th spot so the fight for the final Champions League spot is very much alive.

Piatek is expected to retain his center forward spot with Cutrone on the bench. Suso returns to the front three that continues to feature Calhanoglu. Midfield will feature the much improved Bakayoko with the impressive Paqueta but the disappointing Kessie is not expected to be dropped. Calabria and Rodriguez have shown good form and so have Romagnoli and Musacchio. The defensive line including Donnarumma have been in good form and deserve credit for keeping six clean sheets since mid December.

Roma are days away from losing 7-1 to Fiorentina in the Coppa and are amidst their own crisis. Eusebio Di Francesco is in danger of losing his job if Milan win. The team are also missing Nzonzi and Cristante due to suspension and will be short in midfield.